The art of Forgiveness - practical method

A few days ago I made a post about the capital importance for forgiving others in order for us to heal and to move on. Yet, forgiving is much easier said then done. In this post I wish to offer a practical method that has helped me very much to forgive. In the video bellow I describe the technique of forgiveness and I also share some aspects from my practice with it. By repetitive practice we all can become masters of the art of forgiveness. The technique offered here is taken from the book: ''THE SECRET TANTRIC PATH OF LOVE to happiness and fulfillment in a couple relationship'' by Yoga Teacher Emeritus Gregorian Bivolaru. The book can be bought online on www.nathabooks.com
Posted by arthur lederer at 1:44 PM No comments:

Give yourself the Gift of Forgiving

On the occasion of the Jewish day of atonement, a day dedicated to praying for forgiveness, I found my heart filled with crystalized ideas and notions about the great importance of actually forgiving others. With love, I offer some of these ideas here in this video, in the hope that they will be of use.
Posted by arthur lederer at 12:49 PM No comments:

Who the BLEEP wants to be skinny?

Society today tells us that to be successful and happy we have to be beautiful – and to be beautiful we must be skinny. We see it in every advertisement, every movie and every TV series. Due the lack of a real education system that aims at making us conscious human beings and more than just consumers, the triad of advertising-TV-Cinema becomes the real ‘educator’ telling us what is and what isn’t desirable. Alas, this modern ideal of skinniness as beauty is not harmonious and leads to many problems that affect us as individuals and as a society today.

WHAT IS VERY STRANGE about Dr. Strange!

Last week I wrote a post about the film ‘Dr. Strange’ – about how much I liked it, especially in the context of the way it depicts MAGIC. I also pointed out some of the shortcomings of the manner in which this topic is addressed in the film. After many have read that post and I received many questions and comments about the film – about both its strong sides and its shortcomings – I will dedicate this post to a couple of key elements which unfortunately take this film in a very bad direction.


Indeed, this film deftly approaches the topic of MAGIC – of the possibilities that open before us when we utilize more fully the Human Technology which is at our disposal (about this – read the previous post entitled ‘WHAT IS NOT SO STRANGE about Dr. Strange’). However, Human Technology, like any form of technology, is neither good nor bad – it is neutral. It can be used in constructive or destructive ways. The film makes a couple of choices, which subtle and hard to notice as they may be for some, are none the less taking the application of the principles presented in this movie into a disharmonious and a possibly destructive direction. These unfortunate choices are actually fundamental dilemmas that many spiritual practitioners who aim to better themselves face often on their path – and so we would benefit from understanding these.

WHAT IS NOT SO STRANGE about Dr. Strange?


Last night I went to see the new film 'Doctor Strange'. I enjoyed this film very much. Beyond the great humor and spectacular effects – it also addresses a topic which is very dear to my heart – magic.

Insight into the mind of a slanderer

A few days ago i had a unique experience of speaking directly with a person who actively engages in spreading slander of the worst kind. This experience was most educational for me, and i will share it here.

last week I shared on my facebook page an article which i have written and which was posted on Natha's web-portal www.nathayogacenter.dk. you can see the English version of the article here.
The article is entitled 'Health is a state of Mind' and describes the participation of Natha in Denmark's largest health fair - a truly marvelous event, which i had the good fortune of documenting.
Not long after I share the article on facebook, it was commented on. the comment came from a person whom i don't know and never talked to, but none the less he is one of my hundreds of 'facebook friends' (I am not very selective in confirming friend requests - you could have a profile named 'Hitler was right' and i would probably approve you as a friend).
I often get interesting comments on my posts, but this one was a whole other kind of interesting. This guy managed to jam a lot of meaning, emotion and suggestions into just 2 short words: 'Pedophile-joga!'.
I thought perhaps he was branding a new form of Yoga, but then i noticed another comment by the same person on my post: 'Sexual exploitation of children, intrusive in the "guru" etc etc' (google translation from the original language of the comment).


I do not want my facebook page to be a place for such discourse. A good name can take years to build and seconds to destroy. We should not be so casual about it. Its easy to spread rumors, but do we deserve anything less then the truth? and truth demands more then the phrase 'Pedophile-joga'. Such accusations should be backed up by proof - and most probably presented to the police and not on facebook. So, I proceeded to remove the comment from my wall.
My first emotional reaction was of anger - He is talking about Gregorian Bivolaru, my Spiritual Guide, a man i know and of whose innocence I am convinced - both due to my experience with him and because i actually investigated. Further more - Grieg was actually accused of many things - and of all those accusations none are true. But Pedophilia was never one of them!!! So, my anger was, i dare say, justified.
But then something happened. I realized that this person who posted these comments is also a human being, like me. Suddenly, despite being angry at his comments, I felt love for him. And so, I decided to send him a  feedback - why I removed the comment.
You can see the feedback bellow (the first sentence was dictated as default from facebook, but i take full responsibility for all the typing errors - these are all mine): 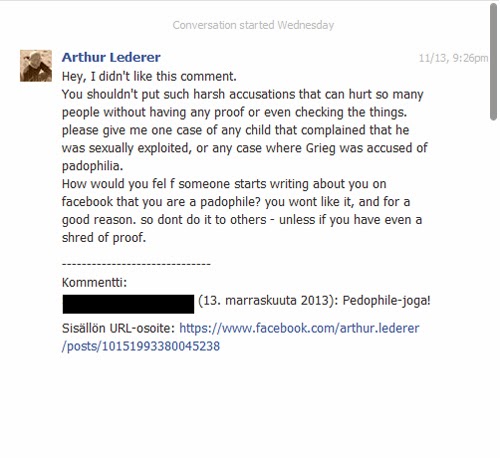 I thought that was the last of it, but imagine my surprise when the person in question sent me back a message.
I must say, my heart jumped with joy. I have seen the work of people who have spread such terrible and offensive slander, but this was the first time I actually had the chance to speak with such a person directly!
The more the conversation progressed, the more intense became my curiosity to understand this person - why does he do what he do?

The European Council against Circumcision 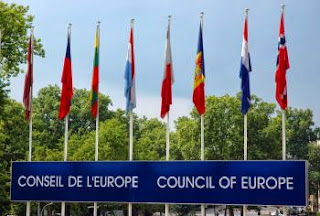 2 days ago the European Council in Strasbourg has decided that the practice of Circumcision in both men and women is forbidden, until they have reached the age of 15 and can chose it for themselves. The Council called circumcision ''an injury upon the physical integrity of the children''.
This decision has sparked anger among religious groups, both Muslim and Jewish and even an angry response from the Israeli Foreign Ministry which said ''This decision is casting a heavy moral shadow on the entire council and is contributing to flaming the fires of hatred and racism in Europe''.